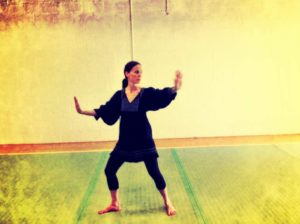 Tai Chi is a non-competitive self-paced system of gentle physical exercise and stretching. To do Tai Chi, you perform a series of postures or movements in a slow graceful manner. Each posture flows in to the next  without pause, ensuring that your body is in constant motion.  There are may different styles of Tai Chi such as Yang, Chen and Wu. Each style has it’s own set of movements and within each style their can be many variations.

Tai Chi is often described as “Meditation in Motion.” Coordinating rhythmic patterns of movement with breathing, Tai Chi helps you achieve a sense of inner calm. The concentration involved with Tai Chi forces you to live in the present moment putting aside distressing thoughts allowing the body to heal and balance itself both physically and emotionally.

“When the mind is at peace, the body knows no suffering.”

Tai Chi and Qi Gong sessions are open to all levels and taught by Keith who has over 25 years of experience of training in martial arts, starting his career at the age of eight.  Keith has trained with some the most well know Masters in the world traveling as far as Korea and Thailand to pursue his passion for teaching and training in Tai Chi, Meditation and Martial Arts. Please visit our Classes Page to see where and when our current session is happening.

This is a summary of what the Harvard School of Medicine says about some of the physical benefits of regular Tai Chi practice:

Although Tai Chi is slow and gentle and doesn’t leave one breathless, it addresses the key components of fitness — muscle strength, flexibility, balance, and, to a lesser degree, aerobic conditioning. Consider the following evidence:

Muscle Strength. In a 2006 study published in Alternative Therapies in Health and Medicine, Stanford University researchers reported benefits of Tai Chi in 39 women and men, average age 66, with below-average fitness and at least one cardiovascular risk factor.  After taking 36 Tai Chi classes in 12 weeks, they showed improvement in both lower-body strength (measured by the number of times they could rise from a chair in 30 seconds) and upper-body strength (measured by their ability to do arm curls).

In a Japanese study using the same strength measures, 113 older adults were assigned to different 12-week exercise programs, including Tai Chi, brisk walking, and resistance training.  People who did Tai Chi improved more than 30% in lower-body strength and 25% in arm strength — almost as much as those who participated in resistance training, and more than those assigned to brisk walking.

“Although you aren’t working with weights or resistance bands, the unsupported arm exercise involved in tai chi strengthens your upper body,” says internist Dr. Gloria Yeh, an assistant professor at Harvard Medical School. “Tai Chi strengthens both the lower and upper extremities and also the core muscles of the back and abdomen.”

Flexibility. Women in the 2006 Stanford study significantly boosted upper- and lower-body flexibility as well as strength.

Balance. Tai Chi improves balance and, according to some studies, reduces falls.

Proprioception — the ability to sense the position of one’s body in space — declines with age. Tai Chi helps train this sense, which is a function of sensory neurons in the inner ear and stretch receptors in the muscles and ligaments. Tai Chi also improves muscle strength and flexibility, which makes it easier to recover from a stumble. Fear of falling can make you more likely to fall; some studies have found that Tai Chi training helps reduce that fear.

Keith began training in Tai Chi when he was in his early 20’s because of problems with an auto-immune condition that caused debilitating arthritis.  Keith has since completely recovered from his condition due to regular Tai Chi practice, acupuncture and a healthy lifestyle.  He currently takes no prescription or over the counter drugs to manage a condition that he was once told would put him in a wheel chair.  You can be assured that Keith takes his practice of Tai Chi and its instruction very seriously while still making it extremely fun to learn.